The demo videos - how to teach music to children

I decided to film as we worked with the children rather than to film 'prepared' children - I think it's much more helpful to see work in progress than to see polished performances that leave you wondering how they were achieved. The groups are of varying sizes, showing that the activities are easily adaptable to classes, small groups, and families at home. Occasionally I've included audios of children's playing and singing if they were not ones who were allowed to be filmed.

The Early Years videos include reception children and several completely new three-year-olds in their first term. Some begin by observing then, as they gain confidence, they start to join in more fully. I gently encourage everyone to participate and you'll see a difference as you work through the units. The singing isn't perfect, but that's OK because the whole concept of music education is based on learning and development. I especially like the way that some of the videos show the current stage of the children's musical understanding and suggest how it can be furthered, validating the 'spiral' curriculum approach.

I'm amazed at the concentration of these little children; they are a credit to their parents and to Forton school. The videos were filmed in one-take sessions, with edits only to join two clips together or to remove irrelevant bits. There is a saying in film-making, 'Never work with children or animals' - just when I thought a good video was emerging, a three-year-old would sneeze (trust me, you don't want the full details) or say they want a wee-wee. We have done our best to edit out any embarrassing moments! 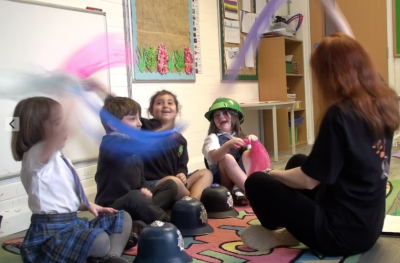 The Key Stage 1 children were, again, not specially selected - this was run as a after-school club which meant that it was a small group of Years 1 and 2 children, whose parents allowed them to stay behind and be filmed. Because the group is small, the interaction between teacher and pupils is less formal than in a classroom situation and the children were encouraged to speak freely rather than put hands up. The Key Stage 1 filming coincided, unfortunately, with the 2020 outbreak of the COVID-19 virus, the group dwindling as parents' anxiety increased. We finished filming just three days before the schools closed.

In this video, we are an Ice Cream Machine - yum yummy yum!

Inevitably, looking back there are some things I wish I could have done differently. For instance, I was working to a deadline so I had to make the Early Years sessions longer than I would choose in a 'real' teaching situation. Some of the videos show several linked activities such as singing a song, then tapping the pulse, then clapping the rhythm; this flows well through a music lesson with Key Stage 1 and that group would happily have carried on for longer than an hour. For very young children with a shorter concentration span, it's often better to build up the activities in separate sessions. 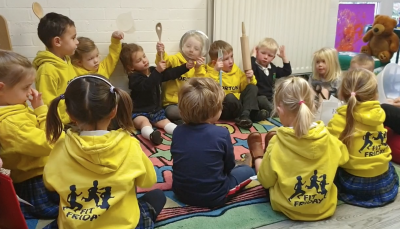